Is Resurrecting Our Dying FGC A Herculean Task Part Two 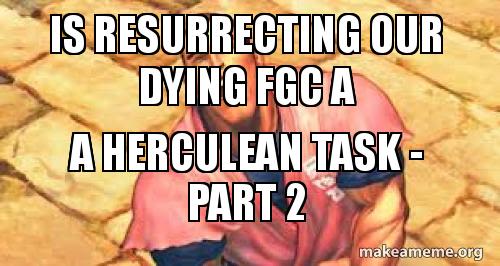 
If you lost too much and couldn’t keep up with the pace, there were other fighting games where you could shine and hence, fighting gamers were forced to improve themselves – either out of shame or ego or both - instead of fleeing with tail between legs or retiring into oblivion. And then the fighters kept coming – Mortal Kombat  1 & 2, Turtles’ Tournament Fighters, Tekken, World Heroes, Samurai Showdown, Eternal Champions, Killer Instinct (much later), to mention a few.

It was a fighting gamer’s Golden Age and was swell until the USA 94 world cup. The hangover from the world cup wasn’t entirely gone from our bodies. And then the fact that some of our players now got signed into international clubs began the craze for club football in Nigeria.  Then Konami did it. They released International Superstar Soccer. Before now there had been soccer games on the SNES but they were boring and hardly played. ISS came and changed all that. It was the closest thing back then to real football and everybody dove into it.  People that couldn’t cope with their losses in the fighting games started to seek solace in football. The growing popularity of the English Premier League didn’t help matters. Football was becoming the trendy thing.

Gradually, game houses started to feature more of ISS than Street Fighter. The ones that still stuck to fighting games, soon discovered that they might run out of business soon if they didn’t get atleast one soccer dedicated console. Also,  more people started to buy home consoles and although this was meant to be a good thing, it started to have a regressive effect on the growth of the fighting community because people started to develop the lazy habit of not wanting to leave the comfort of their homes to battle, since that meant they would also pay.

The “Nail In The Coffin”

Then came 1999 and democracy was achieved in Nigeria after years of military rule. It soon turned  to a tale of lamentation for some hardcore gamers. A regulatory law on gambling was included into the Nigerian constitution. This law classified as illegal, slot machines. The argument was that any type of gambling where you had zero control over the outcome (result based on chance) was illegal. Slot machines were the first and most obvious “culprits”. And in our backwards mentality as is the case with pretty much everything Nigerian, slot machines included arcades. Arguments to explain that you needed skill and not chance to win in an arcade “gambling” fell on deaf ears. It didn’t also help matters that some parents started to blame arcade centers for the rise in theft incidences in their homes and some of these parents had one or two people in the government they could influence.
To cut a long story short, the law ‘effectively’ killed off the arcades for that period. Underground at Ojuelegba went ……well, under, and so did many other arcade centers. The effect of this was that fighting games were gradually but surely relegated to home battles.

Then came the stigma of being a video gamer. This had been steadily growing through the years. Parents couldn’t understand what their children enjoyed in “playing Street Fighter for hours”. Infact almost all the games suffered. To some degree, they could still understand the soccer games and could still tolerate them, but the other genres were like a puzzle to them, especially the fighting games. Needless to say, soccer games became the main thing. Even the most hardcore of fighting gamers started buying soccer games just to have it (just in case). The pockets of fighting communities started to dwindle.

Fast forward to 2009. Street Fighter IV is released by Capcom after almost 10 years since the last installment. Everybody went wild. It brought back some retired warriors, created new ones and it seemed we were set for another golden era, or were we?

The complaints started. Some people couldn’t adjust to the new Focus mechanic. They started wishing for the Street Fighter 2 series. Then Capcom started their strings of patches, buffing this character, nerfing that character, etc. (this was soon adopted by other fighting game makers and became a norm) Before long, almost everyone started to have something to complain about.
“This character is too strong” “That move is broken” “This game is broken” “They should nerf that move, it’s OP” “They should buff this character, he’s too weak”  were some of the regulars complaints one heard.
**Mind that patches have always existed in a subtle way. Just that back then, they were released as a follow up version to an already existing game, which gamers had to buy. So we looked at the sequels as a “different” game from its predecessor.**


The release of frame data for moves even made matters worse.  “You mean that move is 3F and it has so much invincibility and recovers very fast” “How can a grab be 0P” “Haba, that's a charge move and it is 2F, what the f*&k is Capcom thinking, they better increase the start-up with the next patch”

That, in my opinion, was where our biggest problem started. People just kept looking for excuses for why they were losing. Nobody was willing to find solutions to problems on their own again.  They would rather blame it on the over-powered nature of a character/move, or on the brokenness of the game or on the stupidity of the developers.
The advent of Google and YouTube further expanded this. Once one person posts a video saying something is OP, those who haven’t even seen it in action would just echo it without even researching to see if it’s true or not.
Most would rather wait, and hope that a patch is released to “fix” a certain “problem” than work towards finding a working solution to that problem. Others just dropped the game altogether. The end result was a terribly weakened fighting game community of more noise-makers than actual warriors. The sad part is, video games and fighting games by extension, is becoming a big deal. It took us a trip to an international tourney to register it in our brains that our FGC isn’t the best on this side of our continent as we erroneously presumed before.

Where Are We Now?

The community at present is partly filled with tired players who have little or no zeal to do battle. Coming for tournaments is a big issue and most prefer not to leave the comfort of their homes. A lot of us attribute this to work but the funny thing is that the Ivoriens, who are our current bench mark to beat in terms of competitive fight gaming, have a lot of working class fighting gamers too. The only difference is that most of them, about 60% - 70%, are passionate about improving their FGC. They have a funny motto over there: Work hard, Play harder.
It’s beginning to dawn on us that our FGC is dying and if we don’t do something about it, we might wake up one day and see that it doesn’t exist anymore. We can’t even have a tourney and boast up to 40 individual fighting game entrants. And yet we have players who claim to be FGC enthusiasts and expert gamers.