Is Resurrecting Our Dying FGC A Herculean Task Part Three 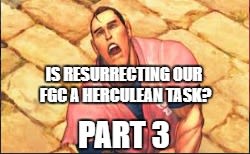 This is the final part of a 3-part article.
You can read part 1 here and part 2 here.

WAY FORWARD?
Hope isn’t lost, far from it. But we need to work harder if we are to build a vibrant and fearsome FGC. We can return back to the era when fighting gamers are treated like the celebrities that they are. Below are some of the solutions I personally think would help us on our way to the promised land of a formidable FGC.


- STOP COMPLAINING AND JUST PLAY THE DAMN GAME OR LEAVE IT
“Mehn, this dragon punch is too strong” “Zangief’s pile driver takes too much life” “Bison cheats with grabs”  “Ken is too strong”

It’s possible to have heard any of the above complaints in the era of SF2Turbo, one of the most broken fighters in history. Yet that was where the complaints ended. Nobody kept whining about it EVERYTIME. Nobody started asking for a patch; Nobody started waiting until the developers “balanced” the game. People just  started looking for solutions…. And they usually found it. They just adapted and started developing ‘techs’ on how to deal with the moves or the character. The funny thing is that back then, there was no Google to help you get easy answers, yet we thrived.  There were no mobile phones to call someone and ask for help yet we found the solutions somehow. Infact there was no practice mode (K.I was the first to introduce the feature), yet people labbed and practiced somehow. So how come now that we have advanced technologically – with  Google at the click of a button to get almost any gaming related solution you want; with mobile connectivity to get answers from friends and other gamers; and with YouTube to see things for ourselves and apply – it is suddenly more difficult to cope?
Answer: We have become LAZY.  Keyword is LAZY. Nobody wants to think. Nobody wants to work for solutions. Some others do not even want to practice and better themselves. They just want to put on the game, press one button and win, no stress. It doesn’t work that way. While I agree that it is a good thing for patches and game balancing to be done from time to time, we shouldn’t put all hope on it like people waiting for a promised messiah if it isn’t available yet. Stop complaining, play the game and try to adapt. You would soon find out that the solution was actually closer to you than you even thought.

Have this at the back of your mind - there is no way a game's character roster would ever be balanced unless that game has just one character that is duplicated and given different names. It's just like saying you want all kinds of fighters - boxers, wrestlers, kickboxers, traditional martial artists, etc - to fight the same way which is not possible.


- CHALLENGE STRONGER OPPONENTS AND ACCEPT CHALLENGES Most of us are very content with playing only people we know (and sometimes believe) we can beat. While there is nothing wrong in that, the downside is that it will not significantly improve you as a player. This is not to say you should not accept challenges from weaker players, no. We should all help each other grow. The point here is that do not go out of your way to challenge people you know you are much better than, instead, challenge those that are much stronger than you. That is the only way you would grow.


- DEVELOP A POSITIVE ATTITUDE FOR LOSING
When people lose, it is okay to feel bad or salty. Maybe you should have won, maybe you made a silly mistake, or even maybe the opponent was too strong and you were helpless. But quitting a game just because you lose in it simply means you WOULD NEVER BE GOOD IN THAT GAME OR ANY OTHER FOR THAT MATTER. If you transit to a game where you feel no one plays and you start to dominate, it is only a matter of time before one or two people enter the game and beat you and then you would suddenly realize that you have been wasting your time and then as usual….QUIT AGAIN. If you don’t lose, you would never win. Am sure we have all heard the saying – Winners don’t quit and quitters don’t win.


- SHARE TECH (EXPLAIN THINGS TO THOSE WITH LIMITED KNOWLDGE)
This, unfortunately, is something we are almost all guilty of.  We tend to want to hide tech or strategy if it is working for us, probably because we want to maintain our dominance or position at the top. Being at the top is good, however, if you dominate a game and others can’t keep up, not because they are not good, but instead because there are certain things they are probably not doing right due to their uninformed understanding of the game and you (the better player) decides not to explain to them even when they ask you, then even you won’t get better. Believe it or not, there are instances where you teach or explain some things to a supposed lesser skilled player and he uses that tech in either a very crude way or an advanced way that you never thought possible. This would make you develop a counter strategy or tech and in the long run, the both of you are improving and the community as a whole.


- LEARN FROM YOUR LOSSES
For most of us, the only thing that keeps burning in our hearts after a loss is revenge. A salty runback and in most cases, a blind one.  We do not understand why we lost, what we were doing wrong or how we could adjust. We just want to beat the person that beat us and disgrace him back. And this usually leads to us getting bodied all over again. Revenge is a good tool when used properly but can be very self-destructive when used blindly. For instance if in a game, someone keeps outpoking you, and beats you a set of games, you should be able to decipher the reason you were losing and plan a counter strategy before engaging him again; not just blindly rushing to a salty runback when you haven’t even  figured out how he beat you. I have played someone before who was always beating me and I noticed that anytime he floored him, he had a sequence of a backdash, a fireball and a vortex starts. I came up with a counter strategy of always making sure I left an EX bar at any point – I literally learnt to suppress any temptation of exhausting my EX gauges and leaving at least one for me to be able to escape the vortex when it starts. Most of us unfortunately do not develop counter strategies before going for a revenge match, we do not even know why we lost. And we keep losing because of that simple oversight.


- ATTEND LOCAL TOURNAMENTS
Everyone can win when they are relaxed and calm, but only true winners can  win under tensed, hyped and hot-seated situations. Tournaments provide these situations and even more. The reason why the pros are so good isn’t because they play in their comfort zone, no. It’s because they have learnt how to adapt in enemy territory, thrive in them and excel. This is why it seems they are unbeatable. When tournaments are held, about 60% of the time, you see the same names – The Tokidos, the Daigos, the Nuckle Dus, the Infiltrations, the Xians, the Sonic Foxes, the JDCRs, the Saints, the Justin Wongs just to mention a few – amongst the top. These guys have perfected the art of keeping their calm even when under intense pressure and always coming out on top. Believe it or not, tournaments exposes you to different kinds of play and forces you to adapt in the quickest possible time. Asides this, it’s only when we come out in numbers for tourneys that prospective sponsors can take interest in the event and put price money as support. This was exactly how other big tournaments started until they became as big as they are now.

- MAINTAIN A FIERCE BUT HEALTHY RIVALRY AMONGST MEMBERS
Yes, you read right.
There is no growth without good competition. The keyword here is HEALTHY. Because the presence of an adversary or opponent would (or should) fuel your desire to get better. Be it faction rivalries like Shaolin vs TH, DT vs Shaolin or JOAG-inspired rivalries like IYAcgl vs TNMT or personal rivalries like Aensland vs Dragonlord, Shin Shina Vs Aensland, Ibro vs KID, or the hitherto rivalry between ChuX and Ryu Apprentice, the hype and build up that surround these fights are spectacular. For one, they give the loser a goal to meet and essentially to better themselves.


These are the few ways I think the FGC can become more vibrant and return to something close to its former glory. You think there are other things I didn’t mention? Feel free to drop a comment below.
FGC Street Fighter Fighting community Arcades Turtles Tournament Eternal Champions Mortal Kombat Killer Instinct International Superstar Soccer
Author IYAcgl_Aensland
Published 2 years ago
Category General
3